Not for sale promotional books for Hotels No.2:

Say Hello to Sally For Me

After last time's Icons At The Pump Room, as promised here's another not for sale promotional book produced for an hotel: Say Hello To Sally For Me, by Lynda Berry. It's a beautifully produced little volume, with a full cloth binding, debossed front board, and ribbon marker. It's got no ISBN, and was never offered for sale in shops. It's a very rare book. As I write, there are no copies of it on ABE at all, and none on eBay (other than this one). So what's it about? Who's Sally? 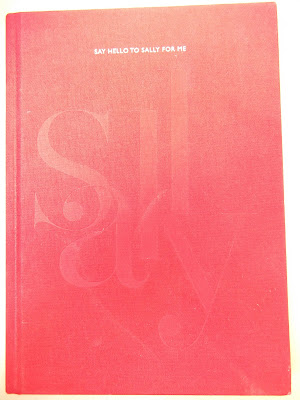 As a child, Sally Bulloch appeared in the film Pure Hell At St Trinians (she set fire to the school). That was pretty much it for her acting career, though you've probably heard of her brother Jeremy, who starred with Cliff Richard in Summer Holiday, and later played the iconic Star Wars bounty hunter Boba Fett... Later in the 1960s Sally was nanny to Peter Cook's children, and regularly sat around the Cook dinner table with the likes of Peter Ustinov, John Lennon and Alan Bennett. After a few years living in Malta she returned to London and worked in the hospitality business, spending most of her life at The Athenaeum in Mayfair, eventually rising to General Manger. She was evidently a force of nature, and was a friend and confidante of the great and good who stayed at the hotel, which became known as the 'Tinseltown on the Thames'. Nothing was too much trouble; her motto was 'the answer is always yes'. Mr Spielberg wants an edit suite installed in his, er, suite? No problem. Mr and Mrs Thatcher are having work done on their house, and want to come and stay for three months? Fine, we'll employ a personal butler for them. Stacy Keach has been arrested for possession of cocaine? Oh dear. Would you like us to retain the services of a solicitor for him? Nelson Mandela once found her so enchanting that he left an entire motorcade idling in the street so he could spend a bit more time with her. Take That announced their split from the Penthouse Suite of the hotel. Sally spent the day trying to talk them out of it.

Here's how her friend and regular guest Richard Dreyfuss describes her in the book:
"Sally was a dame and to an American that means Cole Porter. It means chairs are up on the table because the waiters want to go home. It means there are four guys, two of them from the band and she's still there with them, drinking whisky, smoking cigarettes and having a fabulous time. Two of the guys at the table are probably billionaires and two of them are poorer than church mice, one of them is black and she's probably going to go home with two of them. And that's Sally! She's a dame. She was my dame."

This hugely entertaining book is full of quotes and anecdotes like this. Here's another couple of my favourites:

Tova Borgnine (wife of actor Ernest):
"Some friends had a reception for Bill Clinton and I asked if I could invite Sally. I remember standing with her at the door and when Clinton came in she said, "I've been an admirer for years, how lovely to meet you, I want to read your palm..." and he said, "Do you read palms?" and so they went off to another room, but that was Sally.
When they came back he wanted more... I mean she'd nailed him... she never repeated what went on in that room or their conversation. And I didn't ask, she was always the soul of discretion, always. She would have made a great spy."

Facing up to Russell Crowe:
'When Sally asked the chambermaids how they were getting on with Mr Crowe, they said he was charming, but making up his room was nearly impossible, as it was so untidy.
That evening Sally positioned herself in her usual seat at the bar, with an excellent view of the lobby and waited for him to come in. She called him over and in total English nanny mode said, "Now Mr. Crowe..." and then suggested he was making life difficult for her staff.
Admonished, he immediately went up to tidy his room and needless to say they then spent the rest of the evening together in the bar.'
Here she is, on a magazine cover reproduced in the book: 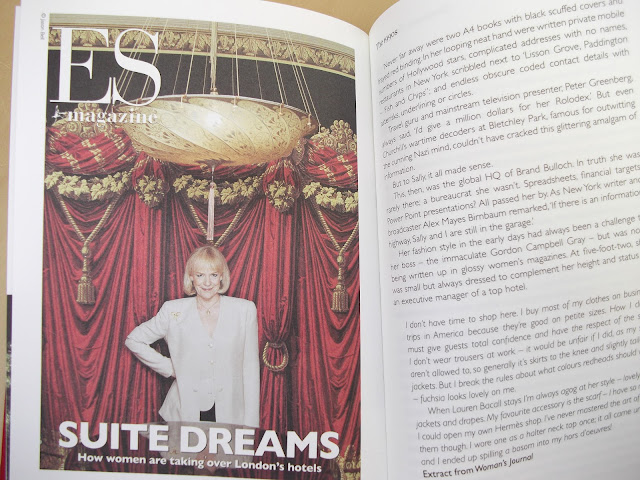 She was obviously quite a character, but sadly Sally died, aged only 59, in 2008. This book, written by her friend and 'accomplice' Lynda Barry as a tribute to her, was published in 2010, and as far as I can tell copies were left, like a Gideon's Bible, in the rooms at the Athenaeum for guests to find. There were probably only a few hundred printed. It's a fun book, about a fun person, and deserves to be more widely known, say I.
Posted by Withnail Books at 18:31