I love the internet. It's amazing what you can learn, and how fast you can learn it. Strap in, this is quite a long post, but it will take you on a journey from a little book on my shelves via a social reformer, a forgotten giant, Mick Jagger and violent mummies, to underwear in South London.

This week's eBay listing is a small leatherbound volume I picked up at a bookfair earlier this year because I simply liked the feel of it. It's not in tip-top condition; the boards are a bit worn and there's a bit of foxing, but the binding is pretty tight, it's got lovely marbled endpapers, and it's old: 1824. Plus, it smells nice. 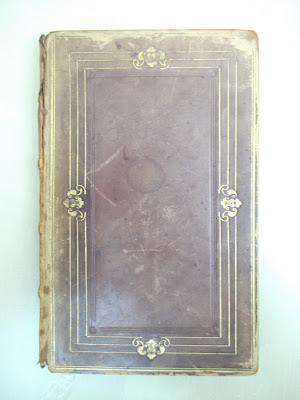 It's not a first. By 1824 Hannah More's Essays on Various Subjects was already over 40 years old and had evidently been through many editions. Subtitled Principally Designed for Young Ladies, the book argues that women are "one of the principal hinges on which the great machine of human society turns" and points out that the education of girls should go bit further than music and dancing. There's also an essay 'On Sentimental Connexions' which basically warns that you should ignore men who flatter you in conversation and agree with your ideas, as they're all only after one thing. (Hannah More never married.) Here's the frontispiece, featuring some Young Ladies. 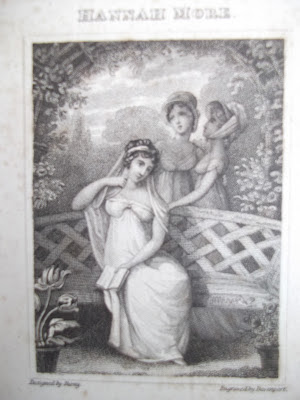 As this biography shows, Hannah More was a fascinating character, who mixed with the likes of Samuel Johnson, David Garrick, Edmund Burke, Joshua Reynolds and William Wilberforce during her long life as a writer, and campaigner for reform in both the rights of women and the poor. Some of her ideas have dated a bit though: she was a strong supporter of teaching the poor to read, but drew the line at teaching them to write as well, lest they have designs above their station in life, and grow dissatisfied. When she died aged 88 in 1833, a few years after this edition was published, she left £30,000, a huge amount of money. As historian Linda Colley has pointed out: "More had become the first British woman ever to make a fortune with her pen."

This post is not (just) about Hannah More though. It's about who owned this particular copy of the book. The inside front board has a book plate pasted to it: 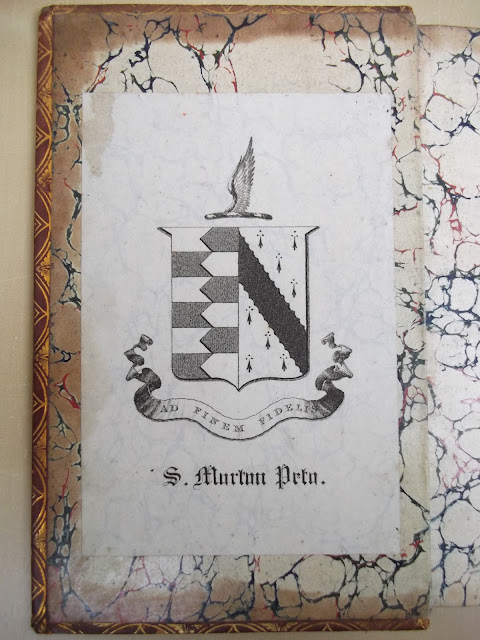 'Ad Fidem Fidelis' (Faithful to the end) is easy enough to read, but the name took a couple of goes. But then I typed 'S Morton Peto' into Google. It would appear that this book comes from the library of a very eminent Victorian indeed... 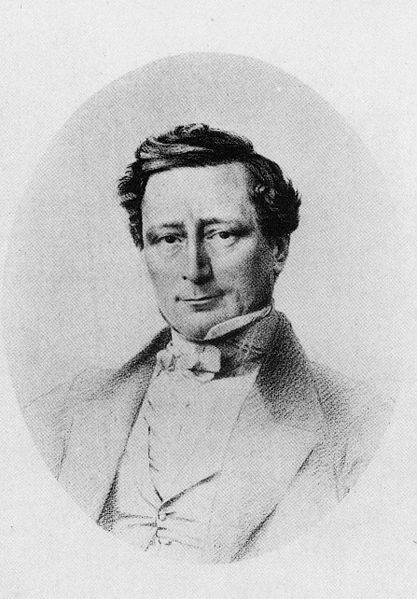 Sir Samuel Morton Peto (1809 - 1889) has been described as the Victorian equivalent of Richard Branson. I'll let the blurb for this recent biography by Adrian Vaughn give the outline of his life:

'Samuel Morton Peto was one of the giants of Victorian Britain who left behind an impressive legacy, evidence of which can still be seen today. Born in 1809, he was an inspired entrepreneur who was, perhaps more than any other individual, responsible for establishing Britain's path to industrial capitalism. An active Member of Parliament, he was one of the most energetic pioneers of Free Trade and a new industrial, social order. To achieve this avant-garde vision, he borrowed and built everything from railways, docks, and harbours to factory towns, dormitory towns, Baptist chapels, dance halls and holiday resorts. Amongst his many famous projects were the Lyceum theatre, Hungerford Market, and Nelson's Column in London, along with several sections of the Great Western Railway, Curzon Street station in Birmingham, and the London, Chatham & Dover Railway. He was also involved in the creation of the Grand Trunk Railway of Canada, railways in Algeria and the Crimean peninsula during the war, and he financed the Great Exhibition of 1851, backing Joseph Paxton's Crystal Palace. Peto's ambition crossed national borders and encompassed European co-operation and Anglo-French finance. In 1857, he was made a baronet of Somerleyton Hall in the County of Suffolk for his services, but ultimately financial crisis caught up with him and he and his family were ruined. He was declared bankrupt in 1868 and exiled himself to Budapest, before returning to England and dying in obscurity in 1889.'

Quite a story, eh? Peto's Wikipedia entry has a few extra details – his involvement with the building of the Houses of Parliament at Westminster made him a millionaire, and he attended the opening of the Algerian railway with Napoleon III – and a post on his biographer Adrian Vaughn's website adds:

'The story of Morton Peto really is a wonderful series of paradoxes. One could say that he robbed the rich to feed the poor, certainly his ordinary shareholders frequently ‘lost their shirts’ but his navvies were employed well for 30 years. Peto eventually went bankrupt and brought down Overend Gurney, the people who had been lending him injudiciously large sums of money. The failure of Overend Gurney brought about the total collapse of the British banking system on 10 May 1866.
Peto’s bust at the exit doors of Norwich Station has an inscription which states that he was a ‘Baptist, Philanthropist and Entrepreneur’  that is true, but he was also a ‘Liar, a Cheat and a Fraud’. BUT – there is always a ‘BUT’ with Peto, he didn’t make shady deals for his own sake, although of course, he took his profit, he used ‘iffy’ money to create better housing, vast new industries, giving tens of thousands employment until recent times. He died on 13 November 1889 without a will, he had very little to bequeath. His wife died leaving £500 to the Baptist Missionary Society. Peto left behind him, a whole new holiday town and fishing port of Lowestoft, the Victoria Docks in London, railways all over the world. Employment, food and housing for the masses.'


Adrian Vaughn's admirable efforts aside, it's fair to say that S. Morton Peto is a mostly forgotten figure now, even though in his day he was up there with, and as well known as, Brunel (who he employed on several occasions) and Stephenson.

But what was he doing with this book, full of advice for 'Young Ladies'? In 1824, the year this copy was published, Peto was only 15. Perhaps he was looking for the inside track when it came to his own wooing efforts? It's perhaps more likely that this book was acquired years later, bought by or given to one of Peto's eight (count 'em!) daughters, and put in the family library, complete with Father's book plate. We'll never know...

One of the houses this book would once have been shelved in has a special place in my heart though. According to this article on the Peto family, in 1875 they lived temporarily in Stargroves, near Newbury. Later owned by Mick Jagger, Stargroves earned its true place in history as the main outdoor location for this:

Yes, everything leads back to Doctor Who in the end.

But that's not all. The same article reveals that  one of Samuel's seven sons, Basil, and Basil's son Christopher, were both MP for Barnstaple (my local constituency when I was growing up).

Another grandson, Sir James Michael Peto, was a Lt-Colonel in the Coldstream Guards. He was also a poet. He published the requisite slim volume in 1947 (Accidental poems of occidental Britain, and other occasional verse). Here's one of his poems. It's about knickers. I love the internet.

You've heard the tale of how I got
My dressing gown with stripe and spot;
Well, now I'll risk being rather bory
And tell you yet another story.
*       *       *      *
One day I went to town by train -
(My home's at Weybridge on the Main
Line of the Southern Railway)- when
I cursed the cross-word, dropped my pen
(My Biro pen!) in the pocket
Of my handbag, where my locket,
Lipstick, rouge, and my mascara
Lie side by side with something rarer . . .
Where was I? Oh, I know, please listen;
I looked outside and saw them glisten,
As we were going fast through Clapham -
(A most peculiar thing to happen); -
Glanced through the window, quite by chance,
And saw a pair of nylon pants,
Glinting glossy, sheer and gleaming,
Just my cup of tea, and seeming
What I'd sought in shops and stores
Bargain-basement and first-floors.
There they were, hung out to dry,
I yelped with envy, gave a cry
Of greed surcharged with thisty longing.
At Waterloo I joined the thronging
Crowds milling for the only cab,
My conscience never gave one stab.
You know my methods; off we went
In search of Clapham knickers bent.
We found them, and I did persuade
Their owner, a girl both prim and staid,
To part with them for two pound ten.
*        *        *        *
They fit divinely. Do say when
You'd like to see them? Darling now? . . .
There, how d'you like them? . . Oh, and how! . .
Michael Peto