A Saki Letter, and an early Lady of Comics

A fly-by post today (apologies for the recent lack, but Things Are Afoot), just to link to an entry on Jot 101, a time-hoovering blog by the Big Cheese of the shop Any Amount of Books in Charing Cross Road. The blog posts interesting snippets from letters, diaries and general ephemera found lurking in books. This entry is about a letter by Hector Hugh Munro, sold back in 2005...

On the headed paper of the now vanished Cocoa Tree Club of St James Street in London S.W. Signed 'H.H. Munro.' Munro (ie the genius of the modern English short story 'Saki') thanks Mrs Lane for a book of her writings she had produced in 1905 about women's roles, high society, champagne etc., called 'The Champagne Standard' --'I have been enjoying its contents, which are new to me with the exception of one article which I had read somewhere. Being much out of England I have missed much of current literature...' He adds 'I hope to be able to break in upon your Devonshire fastness when I am down that way...' adding regards to her husband and sometime publisher John Lane (of The Bodley Head.) 2 sides of notepaper about 90 words. 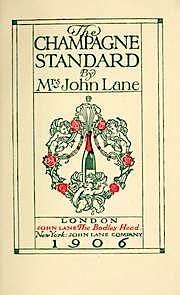 It doesn't say what it sold for, but letters by Saki rarely show up, so I reckon several hundred pounds at least.

As for the book, copies of the rather interesting sounding (it apparently contains a chapter called 'A Plea for Female Architects') The Champagne Standard are readily available on ABE, with even a signed copy lurking in Canada for under $70. Alas, it's not the copy which led to this thank you letter from Saki. It's dedicated to Carolyn Wells, which I'm pretty certain after minimal googling is this Carolyn Wells, a prolific American author and poet who, like Annie E. Lane, was married to a publisher, in her case Hadwin Houghton, of Houghton-Mifflin.

Wells wrote over 170 books, including a bunch of mystery novels starring the 'transcendent detective' Fleming Stone. She also wrote for newspapers, and deserves her place in history alone for being what must be one of the very earliest female 'comic strip' writers. Back in the heyday of Little Nemo in Slumberland, she was writing several strips, including an equally bonkers, though now little remembered strip called Adventures of Lovely Lilly, which as far as I can tell, featured the cherubic Lilly facing down and then beating up a different large animal each week. Here, thanks to Allan Holtz, are two of her adventures, from the New York Herald in June 1907. The rather wonderful art is by G. F. (George Frederick) Kaber. 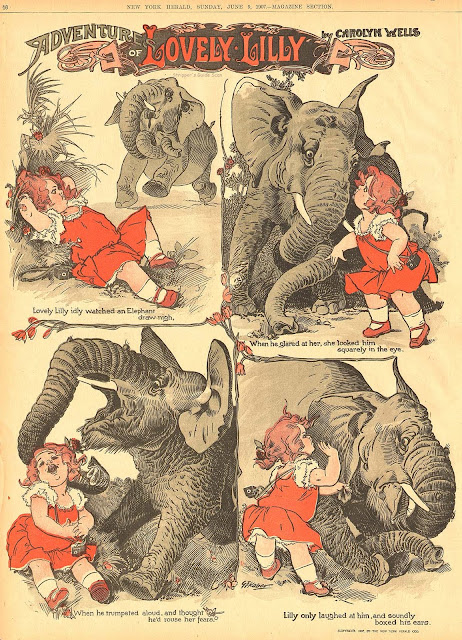 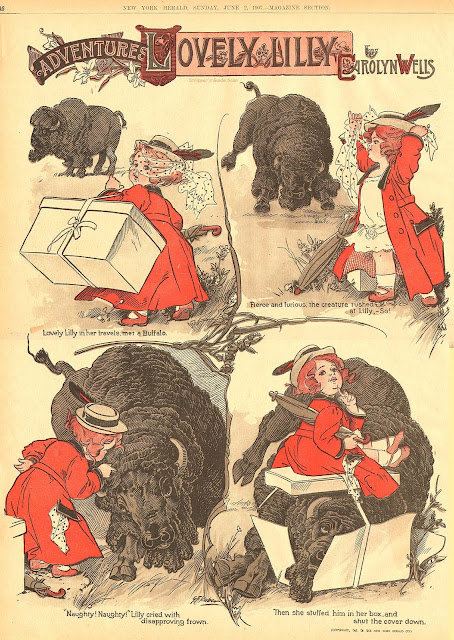 Posted by Withnail Books at 11:00 No comments: