Gremlins and Nuclear War: Why has Roald Dahl's first adult novel Sometime Never been kept out of print for 60 years? 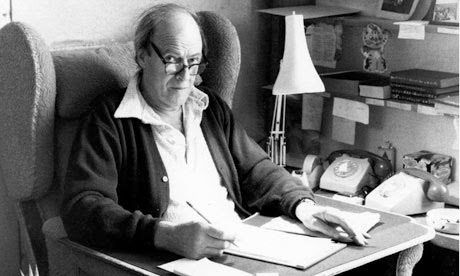 These days Roald Dahl is known by all as a children’s author, and remembered by many for his ‘adult’ fiction, the dark, twisted short stories published in various collections over the years, many of which were famously adapted for TV as the Tales of the Unexpected. Particular fans of the latter will perhaps have tracked down what its current synopsis on Amazon describes as ‘Dahl’s first-ever novel’: My Uncle Oswald, a ribald romp from 1979, which acts as a feature-length prequel for the titular character, dubbed ‘the greatest fornicator of all time’, introduced in two previous short stories (‘The Visitor’ and ‘Bitch’ from the collection Switch Bitch). It’s great fun, but doesn’t read like Dahl was making a serious attempt to write ‘a novel’; it comes across more like a short story that outgrew its wordcount, as indeed it was: he later admitted that his original commission, a request from Playboy for a new Oswald tale, “refused to stop” and grew into a book.

The thing is (and now we’re finally getting to the point of this post), My Uncle Oswald is not Dahl’s ‘first-ever novel’. That distinction belongs to a book called Some Time Never, published by Scribners in the US in 1948, with a UK edition (confusingly titled Sometime Never) from Collins the following year. It has never been reprinted. You’ll search in vain for a mention of it on roalddahl.com. Its Wikipedia entry doesn’t tell you much. Copies are hard to come by: of the few examples on ABE at present, you’ll have to pay well into three figures for one with a decent dustjacket, and the UK edition appears to be really scarce, with only two copies currently for sale (it’s entirely possible that the print run for that edition was only in the hundreds). Even a reading copy will cost you a few notes, and that’s what I finally managed to snap up a while back: a jacketless ex-library copy of the UK edition, which I bought the day it was listed on ABE, thanks to my wants list alert. I’d been wanting to read this apparently ‘suppressed’ work by one of my favourite writers for years!

So what’s it all about? I’ll let the flap copy from the US edition sum it up, as it actually tells pretty much the whole plot in précis:

Some Time Never is a blend of superbly written realism and outrageous fantasy, with an almost Swiftian quality in its savage wit and subtle humor.

It is the story of the hitherto little-known Gremlins. It is moreover a piercing commentary on Man and the qualities in Man which are leading him to his destruction.

The Gremlins were the original rulers of the earth in ages past, but with the advent of Man and the spread of his obnoxious activities to every part of the globe, the Gremlins were forced underground to a subterranean network of tunnels. Out for revenge and for the restoration of their former dominant position in the world’s affairs, the Gremlins bent every effort to plotting Man’s annihilation.

During the Battle of Britain these odd and menacing creatures began an offensive against pilots in an effort to hasten the eradication of the human race. From the experiences of three Royal Air Force pilots, Stuffy, Peternip and Progboot, we get an appalling picture of Gremlin activities, and through the eyes of the Gremlins themselves we get a portrait of Man that is far from flattering.

After the Battle of Britain the Gremlins became convinced that Man would effect his own self-destruction without any help from them – so they ceased their ingenious offensive and retired underground to wait. The atom bomb appeared, more devastating weapons followed, World War III took a terrible toll the world over and finally World War IV finished the job. The Gremlins emerged from their underground tunnels and took over world in which all human life and all works of Man had been destroyed.

The theme of this book is a serious one. Mr Dahl’s implications are the most serious a writer could suggest. Ironic and witty, Some Time Never will amuse you, even give you you a few hearty laughs – but it will also make you think.

As someone who’s written a few blurbs myself, I can tell you that the above is a valiant attempt to summarize/'sell to a general readership’ a book that vehemently resists such things. Which isn’t to say it’s a bad book – far from it.

By 1948 Dahl had already had two books published: 1943 saw The Gremlins, an illustrated children’s story, and his first collection of adult short stories, Over to You: 10 stories of flyers and flying came out in 1946. Some Time Never is in some ways a combined offshoot of both: taking the whimsical characters of the former and putting them into the adult style of the latter. (The story of The Gremlins book, and the ultimately abandoned Walt Disney movie version of it, need not detain us here, but thanks to the scene-setting Introduction in Dark Horse’s still in print 2006 edition of that previously impossible-to-find-for-less-than-$300 book, it is now easily accessible.)

So why is Some Time Never out print? Why has it seemingly been airbrushed from the Dahl timeline? Does it hang together as a novel? No, in all honesty, it doesn’t. This is a young writer writing his ‘important first novel’ and he’s trying really hard, but it doesn’t entirely work. Mind you, his chosen theme is about as big as you can get: the destruction of mankind in a nuclear holocaust. Dahl started writing the book in 1946, and even in 1948 it was still one of the first (possibly the first?) novels published post-Hiroshima to address that looming possibility. There is some very powerful writing though, especially in the chapter after the bomb has hit London. Stuffy survives the initial blast, and emerges from a tube station to wander the ruined streets in a daze:

He walked around a double-decker bus which was standing upright in the middle of the road, and as he went past it he saw through the open glassless windows that the bus was full of people, all sitting in their places, silent, immobile, as though they were waiting for the bus to start again. But their faces were scorched and seared and half-melted and all of them had had their hats blown off their heads so that they sat there bald-headed, scorch-skinned, grotesque, but very upright in their seats. Up in front, the black-faced driver was still sitting with his hands resting on the wheel, looking straight in front of him though the empty sockets of his eyes.

It’s a long way from the BFG doing a whizzpopper in front of the Queen, isn’t it?

And yet, the book also deals in fascinated detail with the green bowler hat-wearing Gremlins and their love of snozzberries (a fruit later revived for Charlie and the Chocolate Factory), so it’s still very much proto-Dahl.

At the risk of making this already long post stupidly long, I won’t attempt more lit crit here, though I will agree with Donald Sturrock (whose excellent authorised biography of Dahl, Storyteller, covers the novel in commendable detail) that Some Time Never is “extraordinary, undervalued and visionary”.

Its author evidently thought otherwise. Writing the “bastard book” was a long and wearing process, and though Dahl had high hopes for it, Scribner’s respected editor Maxwell Perkins (who had discovered Hemingway and Fitzgerald) died before he’d had a chance to read it, it didn’t get any illustrations (Dahl had wanted Mervyn Peake), the reviews were lukewarm and the sales were negligible. Sturrock recounts how Dahl refused a publisher’s request to print a paperback edition after his later success: “Why in God’s world anybody should want to paperback that ghastly book I don’t know.” A signed copy of the US hardback currently for sale contains a typed note dated 1973 from Dahl to the recipient that says, ''I have had a few of them lying around for a long time and it seems to be the one book of mine that nobody wants. I am not sure I blame them.'' He later told a fan who’d written asking where she could get a copy that “It’s not worth reading.”

I’d have to disagree with Mr Dahl: it’s well worth tracking down. It’s a shame that it will probably never be reprinted, but then why would the massive Dahl industry machine bother with bringing back a flawed, untypical and adult novel just to potentially sell a few thousand copies, and get a few eyebrow-raised reviews in the broadsheets, especially if Dahl himself had ended up being embarrassed by it? Better to protect the brand. That’s perfectly understandable, but still a shame. What’s more, Sturrock’s biography reveals the existence of several unpublished short stories in the author’s files, and indeed the manuscript of something called Fifty Thousand Frogskins, a novel that Dahl wrote directly after Some Time Never, which never got properly published at all…

Meanwhile, that copy of the UK edition has now joined the shelves at Withnail Books, should anyone be interested...
Posted by Withnail Books at 10:13