Who Should Play Jackson Lamb? 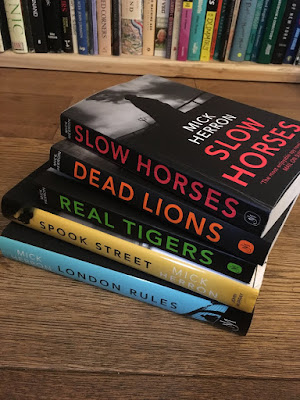 As any advertising executive knows in his shrivelled heart, no marketing campaign, however swish and expensive, will ever be more effective than good old Word of Mouth. A glowing recommendation from a friend is worth more than a thousand billboards. That's how I found out about Mick Herron's Jackson Lamb series anyway (thanks Sam!), and if you've not come across them yet, consider this my glowing recommendation to you. (If you want another, Val McDermid says "Mick Herron is the John Le Carré of our generation.")

The series began in 2010 with Slow Horses, and a publisher and trade dress redesign or two later, has really started to reach critical mass with the the fifth book London Rules, just out from John Murray, with a new novella in time for Christmas and the as-yet-untitled sixth novel proper already scheduled for June 2019. (Update: I've now discovered there's also a previous novella which features Lamb, albeit in a minor role, called The List).

I've bought copies of them all, including a signed first edition of London Rules: a snip at £12.99 from Waterstones while stocks last folks. It's a sign of Herron's skyrocketing profile that first editions, let alone signed ones, of the first few books in the series have rapidly become as scarce as the fabled chicken dentition, and copies will now set you back comfortably into three figures. I've inhaled the first two books, and enjoyed them so much that I intend to ration the rest...

The set up is simple: Slough House is a shabby office block in London, where MI5 sends its problem officers, its screw-ups, to do menial filing work, until they get bored enough to resign (which avoids any messy employment tribunals that might arise from actually firing them). Overseeing these 'Slow Horses' (Slough House/Slow Horse, geddit?) is Jackson Lamb, once a formidable spook in Berlin Station, now a fat, flatulent slob of a man, weak on personal hygiene, but still sharp when it counts, and a black belt in Combat Sarcasm. A has-been leading a team of no-hopers he may be, but Jackson Lamb nevertheless still has fingers in many pies, and it is not wise to underestimate him...

Frankly I'm counting the hours until a screen adaptation of these wonderful books is announced. One imagines that Mr Herron and his agent are currently sifting offers from movie producers, the Beeb, Channel 4 and Netflix/Amazon/etc. The BBC would be the best fit IMHO, but if someone at one of the streamers decides to throw money at it, Auntie will be left in the dust I fear.

So to business: who should be cast to play Jackson Lamb? Well, in the first two books at least, Herron helps us gain an image of his hero by comparing him to "Timothy Spall gone to seed", and "Timothy Spall, but with worse teeth." Spall's agent is surely forewarned and waiting excitedly by the phone, ready to hike up his client's price (rather like Robbie Coltrane's agent after J.K. Rowling said she couldn't imagine anyone else playing Hagrid), but it's worth keeping in mind that when Herron wrote that back in 2010/2013, Spall was rather heavier than he is now.

This is great news for Mr Spall's health and general quality of life, less good for his chances of accurately portraying Jackson Lamb on screen. But they cast Tom Cruise as Jack Reacher, so hey. Spall would actually be a great choice, and would be able to pull off the necessary combination of looking like a soft incompetent on the outside, but underneath being steel.

Mick Herron has been asked by this blog who he thinks should play Lamb. Interestingly, he avoided any mention of Spall, and said, “If we went right through anyone who ever lived, it would be Orson Welles in Touch of Evil (1958). Physically, I think he looks like Lamb in that film; and his voice tone would also be about right.”

Here's Orson in that film: 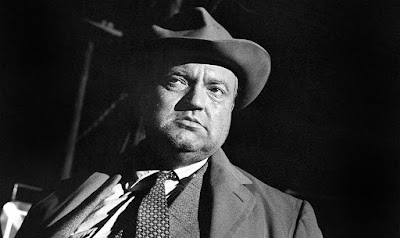 ... and you can watch and hear him in action here.

That's quite a presence (and voice!) to match with a present-day actor. My mate Sam says he had The Sopranos' James Gandolfini in his head as a physical match for Lamb, but of course that fine actor is no longer with us. Vincent D'Onofrio is still very much alive, and has even played Welles a couple of times. He could certainly being Lamb to life, but ultimately it would be favourite, surely, to have a Brit actor. The aforementioned Robbie Coltrane would probably be on any casting director's list, though at 68 he's arguably a little on the old side for the character now, especially if the adaptation was planned to run to several series (let's face it though: he'd be wonderful, he always is).

Before I read Herron's Orson Welles comments, I must admit I had the actor Geoffrey McGivern in my mind as Lamb. Here he is: 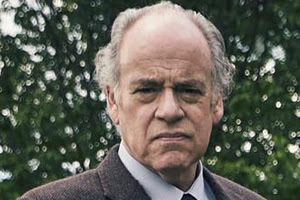 He's not an especially famous face; in fact he's best known as a voice: the original (and of course best) Ford Prefect in the radio version of The Hitch Hiker's Guide to the Galaxy. He's also been seen on screen in loads of stuff over the years, more recently including Peep Show (as Uncle Geoff) and the incomparable Toast of London. I'd certainly buy him as a clapped-out spy in a mac covered in curry stains, and I can hear him delivering such withering Lamb put-downs as, “That is quite possibly the worst cup of tea I’ve had anywhere. And I’m including France in that.”

Who else might be in the mix? Thinking along the lines of a casting director for a British TV production, then there will presumably be some usual suspects: Bill Nighy, for example (because what British TV production would not want Bill Nighy in the lead?). Much as I love Nighy, he'd be wrong for Jackson Lamb, and anyway, he's already done his wayward MI5 agent in David Hare's Johnny Worricker trilogy.

Another possible: Ken Stott, star of Rebus and Messiah, and specialist in crumpled hard bastards.

Or how about the always excellent actor-not-physicist Brian Cox? (Though at 71, he's also maybe a bit too old...)

Going a bit younger (though the character as written needs to be someone who was an active spook in the Cold War, so late-fifties would be about as young as you could go...) another actor with comedy/hard bastard credentials would be Lily's dad Keith Allen (64)... though he'd be perhaps a little too intense for Lamb, who does after all spend much of the novels sitting in his chair, asleep or farting.

A few more left-field choices, not necessarily right, but with enough heft to help get a TV series green lit: Alfred Molina, Alun Armstrong, Tim Roth, Eddie Izzard (the latter two are both 56 now, believe or not).

One actor who would have been perfect (and also famously played Dalziel, a character Mick Herron freely admits was an inspiration for Lamb) is the late lamented Warren Clarke: 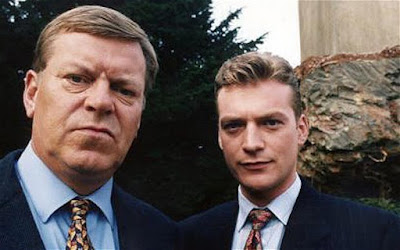 But if we can't have him, who should it be? I'm sure there are many more possible suggestions, but there's a few to get you started, anyway.

Oh, and Lamb's right-hand woman (though she'd never stand for you describing her as that) Catherine Standish should be played by Rebecca Front. End of.

UPDATE: In February 2018, Mick Herron was asked on the Spybrary podcast (no. 34) about progress in a screen adaptation. "The wheels of TV grind exceedingly slowly," he admitted, "but they are still grinding. That's probably about as much as I can say on the topic at the moment." When asked about whether Timothy Spall would make a good Jackson Lamb, he added, "I'm sure he would, he's a great actor, and his face was certainly in my mind when I created Lamb, but I do think they are many actors who would able to [play him]."