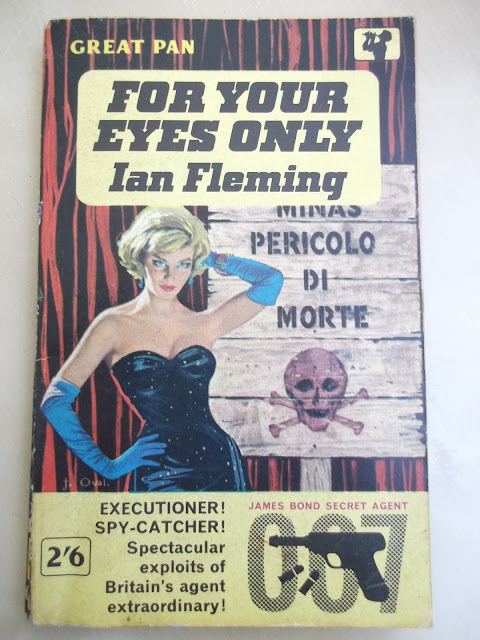 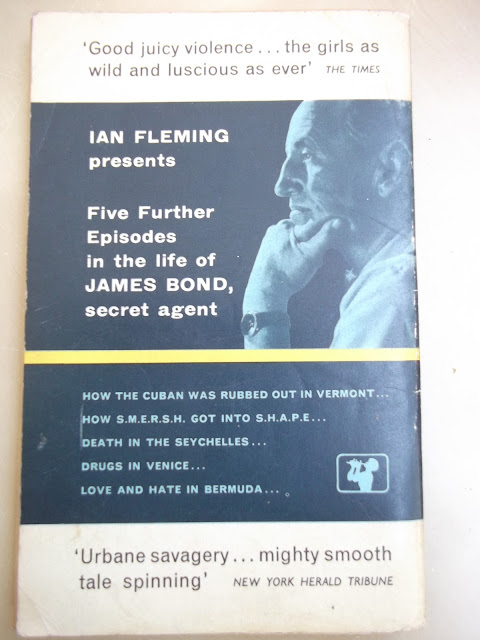 With Skyfall about to hit cinemas (and already getting rave reviews), this week's book is another Pan edition, though unlike the Goldfinger copy I previously blogged about, this one's a first printing, a 1st/1st of the For Your Eyes Only paperback. It's not mint, and a previous owner decided to tear the bottom corner of page 149/150 off, but it's a solid book for the price I'm asking for it. THIS IS NOW LONG SINCE SOLD.

A quick google of the cover artist, J. Oval, reveals he was actually called Ben Ostrick, and used to live in my old stamping ground, Clapham Common. Here's another of his pulp covers for Pan, as seen on the excellent Pulp International: 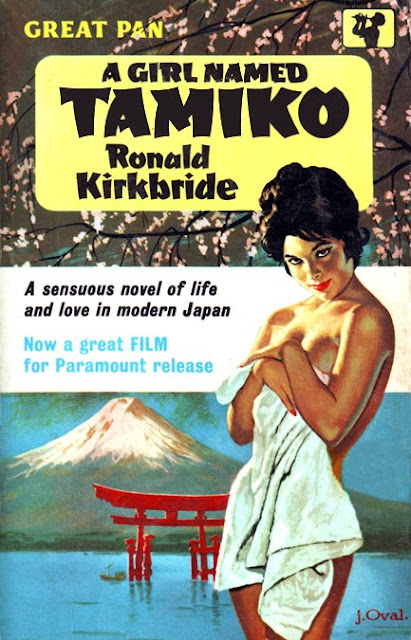 No, I'd never heard of it either. Or the movie version.

Though I must have seen a few on the TV, For Your Eyes Only was the first Bond film I saw in the cinema, when it came out. It's actually my favourite of the Roger Moore Bonds for that sentimental reason alone, though it is quite highly regarded by fans, and Moore himself, because after the post-Star Wars silliness of Moonraker, it was a stripped back, quite violent film, with less Moore (s)mugging and a bit more, well, urbane savagery. This scene is about as 'hard' as dear old Sir Rog got in any of his films:

... and in case it comes up in a pub quiz, always remember that For Your Eyes Only is the only Bond film to date in which the singer of the theme song (the so-80s it hurts Sheena Easton) appears on screen during the opening credit sequence. Yes, Madonna has a (rubbish) cameo in Die Another Day, but you don't see her on screen singing the (also rubbish) 'feem toon.'

Die Another Day was the second 007 film to have a non-Fleming title seemingly created by a James Bond Film Random Title Generator (an idea so good I had to check whether there was one, and of course, there is), the first being Tomorrow Never Dies. I suppose there's also Connery's 'unofficial' Never Say Never Again, but I always thought that had the requisite slightly bonkers Fleming ring to it. Licence to Kill, Goldeneye and The World is Not Enough are not named after a Bond novel or short story, true, but they have a Fleming connection (the meaning of 'double O', the author's house in Jamaica and Bond's family motto respectively) and are at least cool titles.

Skyfall is another non-Fleming title, and while it's easier to work into the lyrics of a song than Quantum of Solace was (though radio funsters Adam and Joe managed it), it's still verging on bland. The trouble is, there's only a handful of remaining unused Fleming short story titles, and I can't see any of them getting past marketing and onto the poster:

'The Hildebrandt Rarity' (sounds boring, or too German)
'Risico' (sounds like a board game)
'007 in New York' (what, he doesn't go anywhere else for the whole movie?)
'The Property of a Lady' (men won't want to see this movie)

I imagine marketing weren't too keen on Quantum of Solace at first, but probably didn't want to admit they had no idea what it meant, and besides, once they realised they could do this with the '007' on the poster they were happy: 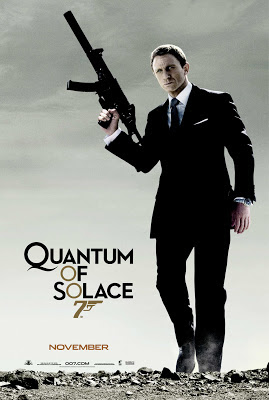 If the producers want to keep it old school Fleming for the title next time around, I agree with the fans who think there's one obvious choice: use Blofeld's alias from You Only Live Twice.

James Bond will return, in... Shatterhand.

2019 UPDATE: IT LOOKS AS IF HE MIGHT, ACCORDING TO THIS ARTICLE IN THE GRAUNIAD, HERE