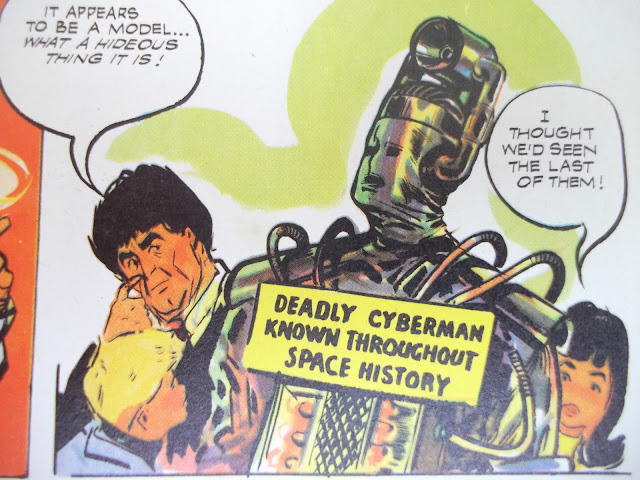 This week's book is a copy of the TV Comic Annual 1969, which was published, as is the way with annuals, in time for Christmas 1968. It's in pretty good nick, not price clipped, with an ink name and address inside, but no other pen mark. I found this in the flea market in Crystal Palace, and it hasn't come far in 43 years: the original owner was a Nicholas Masterson of 44 Denmark Hill, just up the road. Master Masterson was careful enough to only do the quizzes and puzzles in the book in pencil, which is easily removable (though I like to leave such scribblings as they are).

TV Comic, as its name suggests, featured various tie-in strips and stories every week, and this annual, containing a previously unpublished selection, includes favourites such as Popeye, Basil Brush, Skippy and Ken Dodd's Diddymen, but my potential eBay purchasers will I think be interested in only one of them: Doctor Who.

The Doctor's comic strip adventures began in TV Comic in 1964, and in what has to be a tie-in strip record, they're still running today, albeit in a different title: Doctor Who Magazine. Over the years, many artists and writers have come and gone, and in the late 70s/early 80s several of the people who would go on to define the modern comics era did some of their earliest work on the strip or its spin-offs, including both the creators of this rather well known graphic novel.

The history of the strip has inevitably been extensively written up by fans, both online and in print, but the TV Comic stories themselves, aside from the ones that made it into a short lived magazine series several years ago called Classic Comics, have never been properly collected and reprinted.

Many would argue that's no great loss, as the strip was often very silly, and had little in common with the 'proper' Doctor on the telly. While this is undoubtedly true, the art was often rather lovely. Here's the first page of the first of the two 4-page stories in the annual, 'The Time Museum', drawn by longtime Who strip artist John Canning. 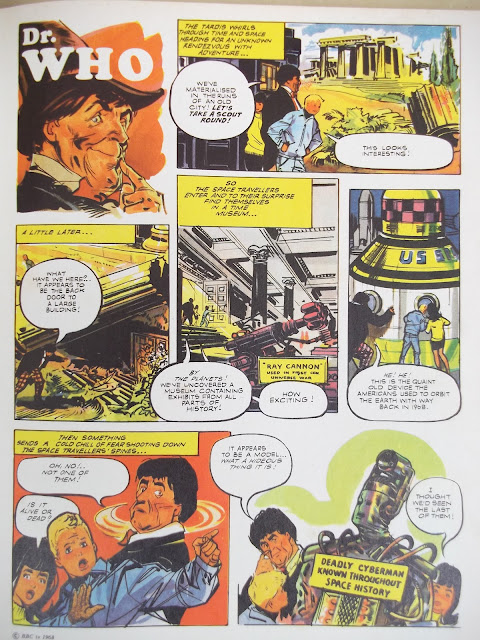 The scripts rarely got sillier than the second Who story in this annual. I'll let the chaps at the fansite Altered Vistas summarise it:

When the TARDIS materialises beside a road in the year 2208 it causes pop group The Electrodes to crash their tour bus. The Doctor, John and Gillian rush to help them and find none of them seriously hurt, but how can they get to their gig to perform for thousands of their fans in just an hour’s time? The Doctor has the answer and equips them all with rocket packs. They are so impressed they hire him as their manager. They make the gig in time.

Between shows the Doctor learns that they did have a manager before, but he tried to trick them out of their money and threatened their lives when they sacked him. The Doctor, John and Gillian observe the crowd at the final gig and, when the Doctor sees an extra wire leading into the group’s speakers, he realises their ex-manager plans to blow them up on stage. He, John and Gillian swoop down using the rocket packs and lift the band to safety just as their evil ex-manager detonates the speakers. The Doctor then apprehends the villain. After seeing the Electrodes successfully complete a planet-wide tour, the Doctor and his companions depart in the TARDIS. The Electrodes are capable of managing themselves.

Wouldn't you just love to see a TV episode with the same plot? I really would, actually.

One of the panels in this story contains one of the Doctor's best-ever lines, in any medium: 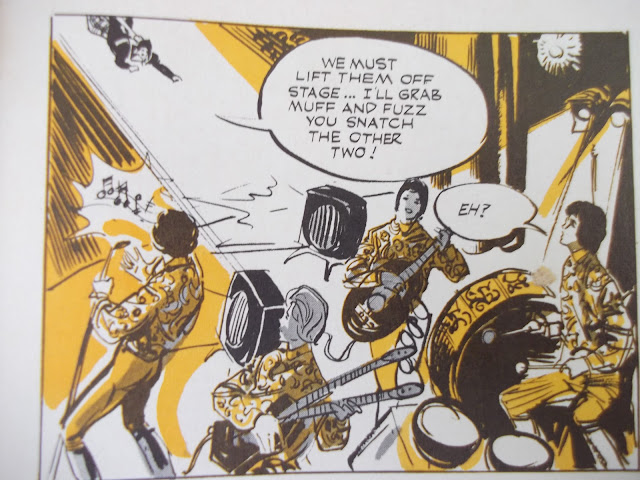 Muff, Fuzz and Snatch? Can the writer of this story, one Roger Noel Cook, really have been utterly oblivious? I think not.

Any upper echelon Whovians reading this post will undoubtedly have a remaining, nagging question. Why is it that Patrick Troughton's Second Doctor is seen fighting a William Hartnell, Tenth Planet-era Cyberman, instead of the sleek new versions he had already encountered on TV? 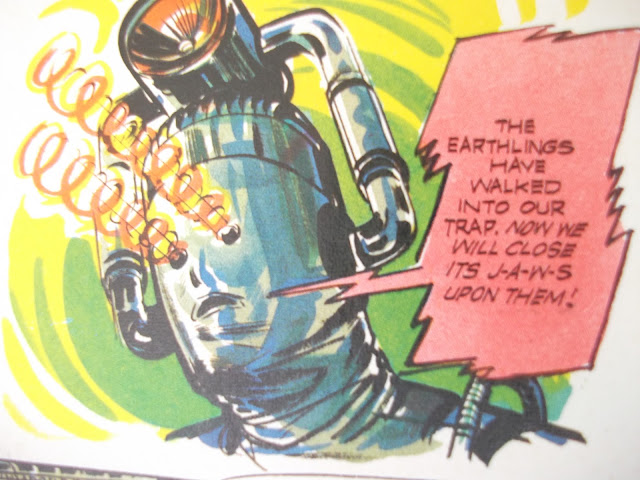 We'll never know, though it's probably just because John Canning only had photo reference from The Tenth Planet. Regardless, it gives me an excuse to run this, a recent piece by the best artist ever to draw a Tenth Planet style Cyberman, the great Mick McMahon. 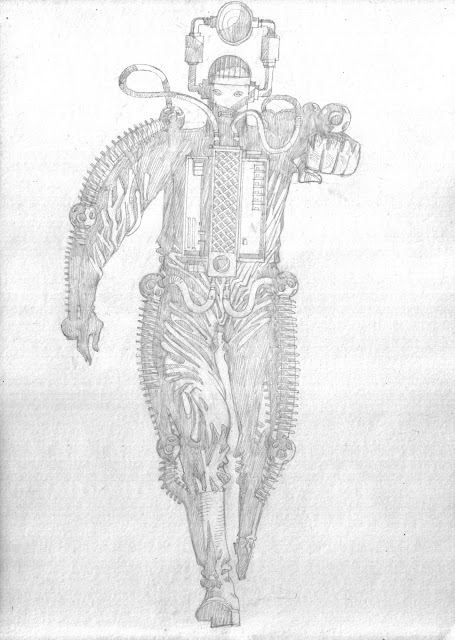 Email ThisBlogThis!Share to TwitterShare to FacebookShare to Pinterest
Labels: Book, Comics, Doctor Who