An original print by William Blake? 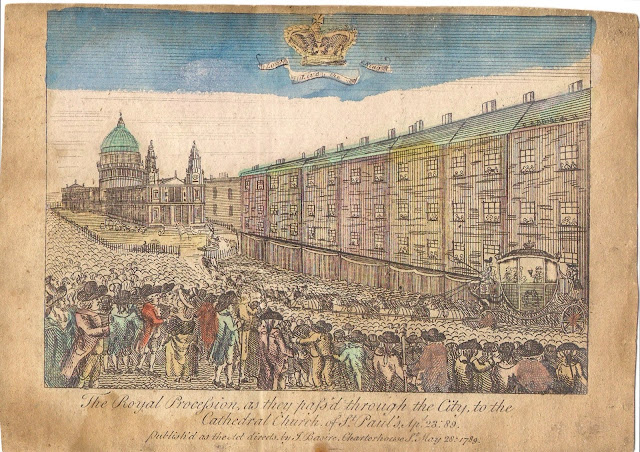 OK, it probably isn't a print by William Blake... but it could be. Indulge me.

The text on this print reads:

The Royal Procession, as they processed through the City, to the Cathedral of St. Paul's, April 23: 89
Published as the Act directs by J. Basire, Charterhouse St. May 28: 1789

A little light googling reveals that the print depicts the celebrations surrounding the return to health of King George III (as in The Madness of...). As this fascinating blog entry details, St George's Day that year featured all kinds of thanksgiving events, from the buildings around the Bank of England being 'lit by 12,000 lamps', to a gala dinner in Ranelagh Gardens, Chelsea. There was also a brisk trade in commemorative items, and this little (it's only 12 x 16cm) hand coloured print is an example of one them.

According to the biography at Blakearchive.org:


"In Basire’s shop at 31 Great Queen Street in London [until it moved to Charterhouse St?], Blake learned the craft of copy engraving as it was practiced in England at the end of the eighteenth century. The standard method of preparing a copperplate for etching or engraving was time-consuming and labor-intensive. The original large sheet of copper had to be cut into appropriate sizes and the edges beveled to facilitate cleaning the ink off the plate and to prevent it from tearing the paper. The plate also had to be squared and its corners rounded, because the pressure of the printing press would leave an impression of the plate’s edges in the paper. Next, the surface had to be polished, cleaned, and covered with an acid-resistant film, or “ground,” which was then darkened with soot to contrast with the copper. Onto this ground the design was then transferred and traced with a needle to expose the plate’s surface to acid, which bit the design into the copper. In a shop like Basire’s, most of the tedious preparatory work was carried out by apprentices like Blake.

"It is difficult to know which of the works produced in Basire’s shop during this period Blake himself may have engraved, because engravers’ apprentices were discouraged from developing their own individual styles, and their work was usually signed by the master."


So, it's nice to think this print had the hand of the great man somewhere in its creation, but we'll never know. Even if it did though, I doubt his heart was in it. In May 1789, young William was probably counting the days until that October, when he was to become a student at the Royal Academy. After that, he would no longer have to bother himself with the 18th century version of the cheap cash-ins to happy royal events that are still around today, and instead let rip with stuff like this: 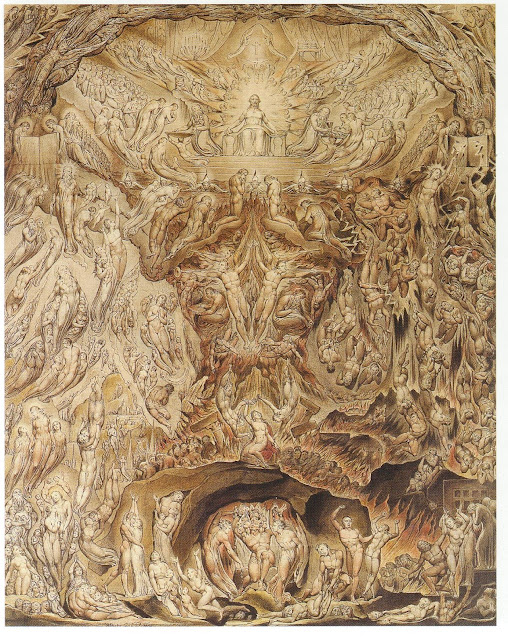