I Was in Doctor Who Once: The Thrilling Conclusion!

Last week, to kick off the 50th anniversary celebrations with some choice Whomobilia on eBay (and also to, well, show off a bit) I posted the first episode of my l e n g t h y account of being an extra for a day in Doctor Who. Part one is here. And now, the conclusion...

After mere hours of hanging about, suddenly, The Doctor walked in. “Hello,” he said, and disappeared into the green room. Mickey and Rose’s Mum soon followed. By this time, a few extras had begun to migrate into the green room as well, so I decided that now was definitely the moment to go in there too. Just to get some water, you understand. Tennant was now dressed in his brand new Doctor costume (pictures had been released to the press just a couple of days before): a baggy pinstripe suit, blue shirt and paisley tie, scuffed white trainers and a long, straight brown coat. He took off the coat, put it down on a table and began talking to the actress who plays Rose’s Mum (who evidently doesn’t actually do much acting when she’s onscreen).

“I’ve just read the script to episode two.”
“Oooh! What’s it like?”
“Brilliant. Though it would be better if you were in it, of course.”
“Oooh, stop it you!”
“It’s amazing. It just keeps getting bigger and bigger. It’s insanely ambitious. It’s got Queen Victoria, werewolves, ninja monks flying through the air…”

At that moment, just as I was hoovering up this solid gold spoiler material, the two mothers came over to ask for an autograph. This is very bad form if you are an extra, but this was special. This was The Doctor. And it was for their kids. Tennant didn’t mind in the slightest (though he had only been playing the part for two days, so hadn’t been asked much yet I suppose), and happily signed away with the usual “Oh, Emily’s my niece’s name,” et cetera. I was determined not to ask for one myself, but I couldn’t resist the chance to touch the hem of his garment, as it were.

So I went over, and actually did touch the hem of his garment.

“So this is the famous new coat,” I said, idiotically. “I just want to touch it.” [What? What did I say? Idiot!] I fingered the collar. “Oooh, is that suede?” By this time, Tennant was looking at me with an ever so slightly alarmed look on his face.

I very nearly replied that I’d read somewhere that, on being offered the role, he’d insisted that he simply had to have a long coat. But that ‘somewhere’, as he and I both would have known full well, was the last issue of Doctor Who Magazine, and I didn’t want to unsettle the poor man any further.

Actually, he probably didn’t think he was being stalked. David Tennant is, and always has been since he was a little kid, ‘one of us’ — a huge Doctor Who fan, who buys the magazine (well, gets it sent to him for free now, I imagine), and would be just as interested in the new Doctor’s costume even if he wasn’t wearing it himself.

Tennant and I exchanged final looks. Mine was trying to convey the relaxed insouciance of a professional who has just had a brief exchange with another in his field, whilst also making clear ‘I’m not a nutter, honest!’ His face was a rather charming mix of a professional being polite with a fan, whilst also admitting ‘Yes I know, I’m bloody Doctor Who! I can’t believe it myself!’

I’m going to like this one even better than Eccleston, I thought.

The actors were soon called away, and we settled down for our final bit of hanging around in the hot hallway. Finally, a 2nd AD appeared. (Or it might have been a 3rd. It’s hard to tell just by looking at them.) “Right, we’re nearly ready. It’s a Christmas scene. The director wants it to look like a Christmas card. It’s snowing, there’s a meteor storm in the sky, it’s Christmas day, it’s all a bit weird and you’re happy! It’s not real snow though. Well, obviously it’s not real snow, but it’s not real snow in the story either. But you don’t know that. OK. Does that make sense?” (Hey, I’ve been watching Doctor Who since I was four. No worries.)

To the set. This was it! Or would be, after another half an hour of waiting about. The condom had been removed from the Tardis, and the precinct had been covered in fake snow. Paper pulp and soap, I’m told. It looked very convincing. Fairy lights twinkled in the windows of the flats above. I watched the cast rehearsing. This was going to be, as I’d thought, a complex boom/dolly shot, swooping down from on high as the Doctor, Rose, Mickey, Rose’s Mum and a young couple of guest stars walked out towards the Tardis, zooming in for quite a bit of dialogue, and then up and away as the Doctor and Rose gazed into the sky. This has got to be the last scene of the episode, where the new Doctor invites Rose to continue travelling with him, I thought. And did say, this time. It was midnight by now and I didn’t care. The geek was out of the closet!

I realised that the little tent over to one side behind the camera was where the director James Hawes and his monitors lived. (Earlier, I’d also recognised the producer, Phil Collinson, but Russell T. Davies didn’t seem to be about.) He’d obviously told the 1st AD (through the intercom that everyone was hooked up to) that he was now ready for a rehearsal including ‘Background’. Eleven hours after arriving, it was time to start work.

“You look like a nice couple,” the 1st AD said to me and Elaine. The very pretty Elaine was one of the aforementioned mothers, and I had earlier learned that her husband was currently in Malta, blowing up hotel rooms for Steven Spielberg (he’s a special effects technician).

“So, it’s Christmas. He’s just proposed,” the 1st said.
“Blimey, really? I know he kissed Rose in the last episode of season one, but that’s going a bit far isn’t it, I mean, the fans will be furious…”
“Not the Doctor you pillock, you!” said the 1st. “Your little character. You’ve just proposed to Elaine here and it’s all happy and fun. You can have a little cuddle and play in the snow.”
“Ah, right.” Time to put the geek back in the closet.

The other extras got their instructions. Pretty basic stuff — walk there, look up, then walk over there’ — but with ten of us wandering about, plus six cast members, it was going to be quite busy, and Mr Hawes obviously wanted it to look just right. It took a few rehearsals. The first time, we were all a bit enthusiastic, running up to each other and gesticulating in amazement at the sky. If it had been Doctor Who: The Musical and this was the climactic number ‘We’re Watching the Skies!’ this would have been fine. The intercom crackled. “David, Billie, that was good, but we’re going to go for another rehearsal. The background needs some work.” No gesticulating then. In fact, after a few more practice goes, Hawes decided that less was more, and a couple of the extras were told their services were no longer required. All that time (and money: about £140 each for a day that ends after midnight), for nothing, because the director thinks the shot looks a little full. But he’s the director, and he can do what he wants. I was beginning to see how everyone on set works together towards one goal: giving the director the elements he needs, from scenery (including us, the moving scenery) to lighting, from cameras in the right place, to lead actors who know their lines. Once he has those elements in place, the director can tweak them, change them around a bit, and finally… “OK, we’re going for a take.”

Up on the cherry-picker, the snow machine whirred into action. Elaine and I were still in the shot. By now we had decided that we were on our way home from a party, slightly drunk and very much in love, though I hadn’t necessarily just proposed.

We must have done ten or twelve takes over the next hour or so. First came the wide angle shot, with the camera and its plucky operator swinging up and down on the boom. Then two cameras were reset for two sets of close-ups, from slightly different angles. It was quite a long scene, about two minutes, and hearing the dialogue, I realised it was definitely the end of the episode.

Some takes were abandoned when the snow was blown away by the wind before it had a chance to fall prettily to the ground. Another was cut short when Tennant realised he had a big soapy ‘snow’ bubble on the end of his nose. Elaine and I had got our bit down pat though, and were quite happy to “go again” as many times as they needed.

We had a feeling it was going to be the final take. When it ended, James Hawes emerged from his tent and simply said “Wonderful.”

The Doctor and friends walk out of the flat, and across the precinct towards the Tardis. It’s Christmas day, the Doctor has just saved the world again, and it’s snowing. Plus, there’s an amazing looking meteor storm in the sky. Mickey, Rose and her Mum are excited. (So are a couple who walk past them. The man stops and gazes up at the sky, rubbing his chin in wonderment. But enough about them.)

The Doctor looks up. “Must be the ship breaking up in the atmosphere. This isn’t snow, it’s ash,” he says casually.

By now, the Doctor’s little group has reached the Tardis (and the happy couple have walked off, still gazing at the sky. No but really, enough about them). The Doctor is getting ready to say goodbye. Rose’s Mum is worried about her daughter leaving her yet again to gallivant around time and space.

“You go looking for trouble, you do,” she says.
“Trouble’s just the bits in between!” scoffs the Doctor. “There’s worlds, creatures all sorts that I haven’t seen yet. Not with these eyes.” He turns back to Rose, and holds out his hand. “You coming?” She looks unsure. He wiggles his fingers. Rose smiles and takes his hand.
“Where we going first then?”
The Doctor points up at the starry sky. “That one - no, wait… that one.”
“That one,” says Rose softly.
“And you know what Rose? It’s going to be fantastic.”

I had to wait six months to see if I actually ended up on screen... but I did, for the aforementioned very nearly thirteen and a half seconds. I was right. It was the last scene of the episode. That's me top right... 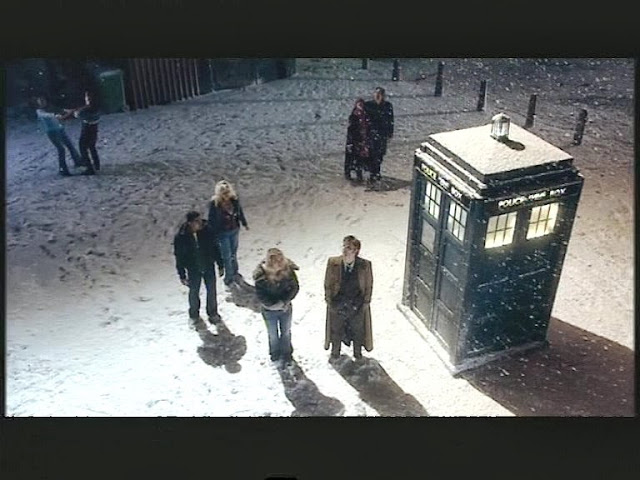 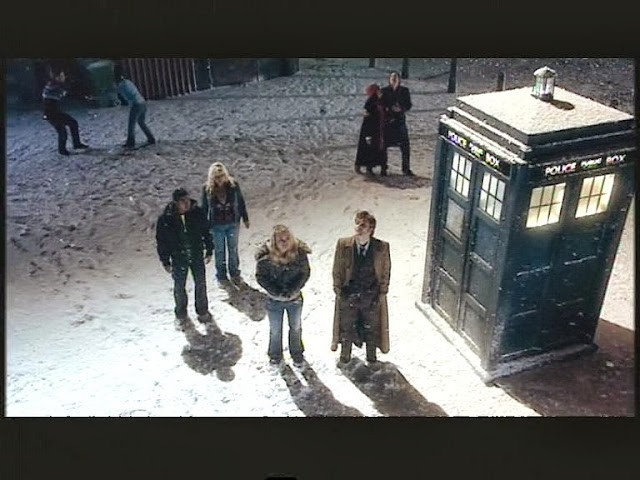 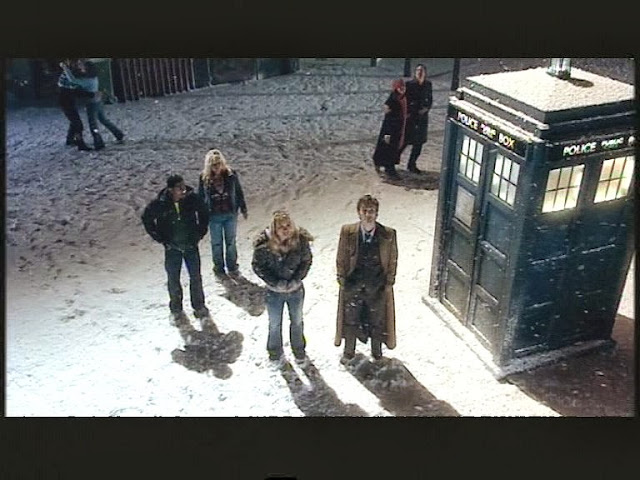 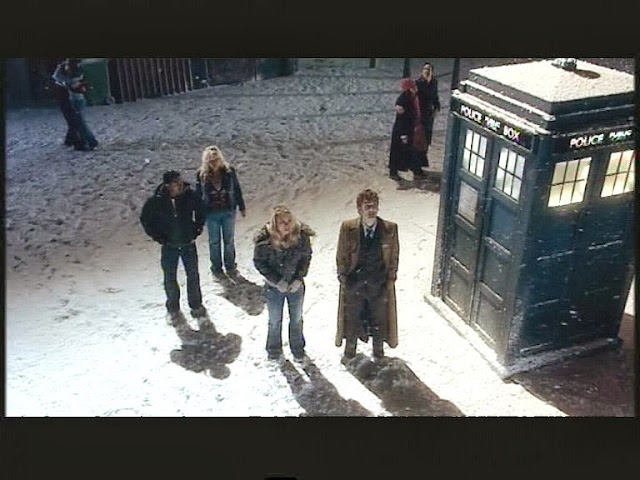 Email ThisBlogThis!Share to TwitterShare to FacebookShare to Pinterest
Labels: Book, David Tennant, Doctor Who, I was a Doctor Who extra, Mysterious Chin-Stroking Man, The Christmas Invasion