Sutekh of the RAF: Obscure Books With Tenuous Connections to Doctor Who No. 1

To kick off what might (or might not) become an irregular series in this month of the 50th anniversary, here's an obscure book with a tenuous connection to Doctor Who, said link being the only reason I originally picked it up when I found it in another secondhand bookshop many years ago.

The copy at Withnail Books does not have a dusjacket, but here's a photo of one that does. 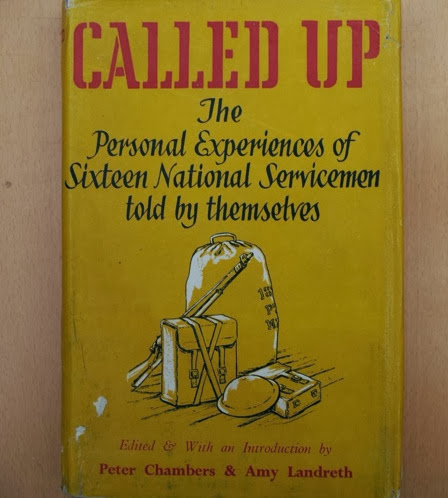 Called Up appeared in 1955, proudly introduced by Chambers and Landreth as "the first report on National Service, based on personal experiences, to be published in this country." They stressed that their 16 young men had written "quite candidly and without fear of censorship." This is certainly the case, from the couple of chapters I've dipped into.

The reason I acquired the book is simple: flicking to the contents page, I saw that one of the writers was a young actor called Gabriel Woolf. To a Whovian of my age, that name instantly beings to mind just one thing. This:


That's Mr. Woolf giving a superb performance as Sutekh the Destroyer, one of the great Doctor Who villains, from one of the very best Doctor Who stories, 1975's 'Pyramids of Mars' (aka 'the one with Tom Baker and the Mummies').

So how did Gabriel Woolf get on with his National Service? He had a terrible time, it turns out. A cultured young man, he wanted quietly to get on and do cultured things, like learn Italian ("My aim was to read Dante"). Alas, he had to put up with his fellow servicemen locking his door and removing the handle, not to mention stuffing his trousers down the toilet. Food was no comfort either: "I have known Service cooks do such things to eggs that they would make a hen wish she were a spinster."

The whole experience left him "deeply bitter over some things... My natural delight in beautiful women has been degraded to violent lust by this unnatural life. 'The expense of spirit in a waste of shame, is lust in action' says Shakespeare. I thank God that an inherent shyness in my nature counteracted the 'action'. But 'the expense of spirit'... that's the thing... and it applies just as well to the idle contemplation of lust, lying in one's narrow military bed."

Hmm. Is he saying what I think he's saying?

Woolf's chapter is hilarious. I can't quite work out if the whole thing is tongue in cheek (there are a few asides which suggest it's not to be taken 100% seriously) or the no doubt heartfelt work of a young man so insufferably snobbish that you, well, would instinctively want to stuff his trousers down the toilet. He's still going at 81, so, if you're a silver surfer and happen to see this Mr. Woolf, perhaps you could let us know?

Back in 1955, he signs off, triumphantly: "I shall never see another man in uniform. I shall train my eyes not to register the impression. For now I am free. Now, I hope, I can learn to love human beings again."
Posted by Withnail Books at 14:38