The Jonathan Cape UK first editions of Ian Fleming's James Bond books are some of the most collected of all modern firsts. Even though Fleming's prose has in places become frankly somewhat dated, in both style and sensibilities (Judi Dench's M would no doubt call Fleming himself a 'sexist, misogynist dinosaur', let alone his creation), the physical books remain beautiful objects, and classics of design, especially the ones with dust jackets by Richard Chopping.

While a mint set of all 14 books as first edition, first state copies in jackets will set you back tens of thousands of pounds, there are slightly more affordable ways of building up a set that will look the same, thanks to later impressions and even modern facsimile editions of the early books.

Anyone entering the dangerously seductive world of Bond collecting will soon become immersed in the mass of arcane trivia which surrounds the first editions, and their all important 'first states': the very first copies off the presses, minus the subtle changes which were often made even during/within a first print run. Got a first edition of You Only Live Twice which says 'May 1964' on the copyright page? Then it's a not a true first. That just says '1964'. If you want a proper, first state edition of Live and Let Die, then you need one where the dust jacket has the illustrator's credit missing. Technically, the Book Club printing of From Russia With Love, not Jonathan Cape's, is the 'first impression' of that novel, because the Book Club actually used a set of sheets printed, and then rejected by Cape for being of too poor quality. They actually have the Cape imprint on the title page, but copies of this Book Club edition are worth a fraction of the 'true' Cape first. 'Go figure', as Bond would certainly not say.

As the popularity of the Bond books increased, so did the first print runs. While the first, 1953's Casino Royale, was only 4,728 copies (many of which went to libraries), the penultimate book The Man With the Golden Gun in 1965 had a whopping 82,000 copy initial printing. It's hardly surprising then that firsts of Golden Gun are still plentiful, and can be had for under £100 in very good nick. If you ever come across a copy in a charity shop or boot fair though, always slip off the dust jacket and check the front board. Like Charlie and his ticket, you're looking for a glint of gold...

While it's the most common of all the Fleming firsts, it has possibly the rarest 'first state'. The first few copies off the presses – and no one knows the exact number, though it's said to be only in the hundreds  – had a golden gun stamped onto the front board, like this: 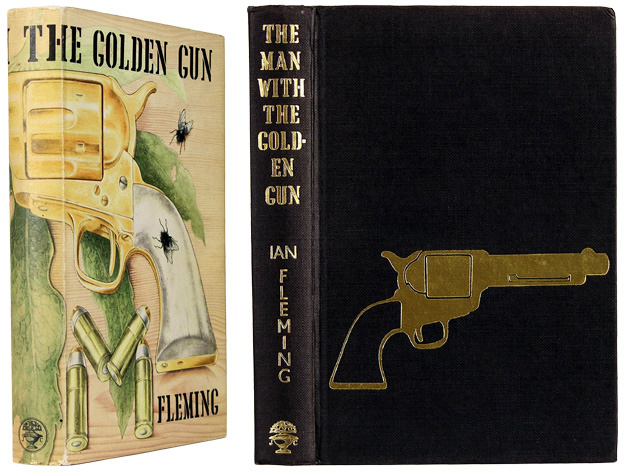 Due to faults in the process, or the fact that it just cost too much (sources differ), the gun was dropped for the rest of the printing. So, if you can find one, you've got one of the rarest Bond books of them all, worth upwards of £10,000 in fine condition. This 'really fine' copy is £15,000! You could buy an actual gun made of actual gold for that, surely...

It's not from the film of Golden Gun, but to finish, this is for my money the best Bond one-liner of them all...