A Halloween Plug: The Art of Horror

As well as manning the Little Shop, now and again I do a spot of freelance editorial work. A book I was Project Manager for has just been published in time for Halloween, and biased though I may be, it really is a stunner, and belongs on the coffee table of anyone remotely interested in its subject area. So if you'll forgive me, this is a shameless plug.

The Art of Horror is edited by Stephen Jones, and features a Foreword by Neil Gaiman, and over 500 images, from early engravings, via book and magazine covers, movie posters and paintings, to cutting-edge digital art, with contributions from a plethora of artists.

It's organised into ten themed chapters, with written contributions from David J. Skal (on vampires), Jamie Russell (on zombies), Gregory William Mank (on Frankenstein's Creature and other man-made monsters), Kim Newman (on werewolves and shape-changers), Richard Dalby (on Ghosts), Barry Forshaw (on psychos), Lisa Morton (on Halloween horrors), S. T. Joshi (on Lovecraft), Bob Eggleton (on prehistoric monsters and other behemoths) and Robert Weinberg (on aliens). Alongside Stephen Jones' detailed captions, it all builds into a uniquely illustrated history of horror. It is, pun intended, bloody brilliant.

You can buy it at Amazon UK or US for a very decent discount, though of course you should patronise your local independent bookseller if you can. If you're quick, you can pre-order a copy HERE signed by Stephen Jones and a number of the contributors (including artist Dave McKean) from Forbidden Planet in London: the signing is on Halloween itself, Saturday October 30th.

Here's just two of the images from the book, the first being of Cumbria's very own legend, 'The Croglin Vampire'. I lobbied for it to be included in the vampires chapter, because it's a great painting by Les Edwards, but also because I live in Croglin!


The contributor copies started going out a week or so ago, and for those of you who know who Basil Gogos is, you'll know how cool it was for him to pop up on Facebook proclaiming the book "may become the bible of Horror Art." In fearful imagery circles, this is like getting a blessing from the Pope. 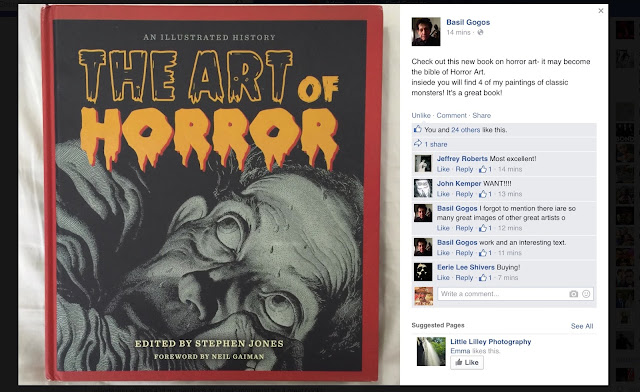 MAY 2016 UPDATE: I'm delighted to say the book has won the Bram Stoker Award from the Horror Writers Association, for Superior Achievement in Non-Fiction. In horror publishing, this is the equivalent of winning an Oscar, so I'm very proud to have been involved!
Posted by Withnail Books at 18:10