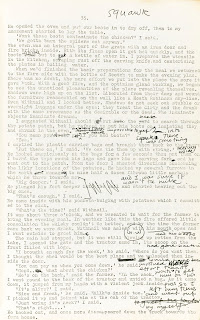 Before it was a script, Bruce Robinson's Withnail & I was a short novel. It was never published, and few people have ever had the chance to read it.

This week, the typescript is up for auction at Sothebys.

The catalogue copy, reproduced here to add to the publicity for the sale (so please don't come after me Sothebys!) reads as follows. It opens with a quote from the manuscript, which includes, rather excitingly, some 'new' dialogue for Withnail...

"...We drove on into the suburbs of the suburbs: Withnail swilling from another bottle and pointing out areas of outstanding civic ugliness.
'That's the reason of course, this country's never been invaded. It's too revolting. Even the Australian's wouldn't come here.'
He passed me the bottle and I drunk three huge mouthfuls, then hid it down by the handbrake.
'Look, look,' he screamed, slurred with drink, gesturing towards a sign - "Accident Black Spot. Drive with extreme Care".
'These aren't accidents,' he wailed. 'They're throwing themselves into the road - gladly. Throwing 'em selves in into the road to get away from all this hideousness..."

THE EARLIEST VERSION OF THE CULT CLASSIC. This short novel, which Robinson has described as "70%" autobiographical, was written in 1969-70, when its author was still living in the Camden Town house in which much of the debauched action takes place. Robinson had lived in the house since the mid-60s, when he and his housemates, including Vivian MacKerrell, who was  famously the basis for Withnail, and David Dundas, who wrote the film's music, were still drama students at the nearby Central School of Speech and Drama. Withnail took from MacKerrell his outrageous self-confidence and alcoholism; MacKerrell is said to have downed a bottle of lighter fluid (a tipple Withnail recommends as "a far superior drink to meths") and Robinson's diaries record other sources of booze for the desperate ("...Sotheby's was one of the best shows in town to drink brilliant wine and arsehole yourself absolutely free...", K. Jackson, Withnail and I (2004), p.28). The predatory Uncle Monty is said to have been based in part on Robinson's encounter with Franco Zeffirelli and Robinson even endured a "holiday" similar to the grim days at Crow Crag.
In the mid-1970s Robinson lent this copy of his unpublished novel to another friend, also connected to the Central School and who had lived, briefly, at the Camden Town house in 1969. He wanted her comments on his depiction of the period and later gave her the typescript. In 1980 another copy of the unpublished novel reached executive producer Mody Schreiber, who commissioned Robinson to adapt it for the screen. It took several more years to get the funds in place and the film was made by George Harrison's company Handmade Films (formed to fund Monty Python's Life of Brian), after Harrison read the script on a transatlantic crossing. The film reached cinemas in 1987 and has, of course, since become a much-loved and much-quoted comic classic.
typescript, the first three pages original typescript, the remaining pages being contemporary photocopies, with many pages having revisions, often extensive, in black ink, further revisions in green fibre-tip and pencil, a few cancels in black fibre-tip and minor corrections in blue ball-point, title-page with Robinson's typed contact details (430 King's Road, Chelsea) and doodles by Robinson in black ink, 72 numbered pages, folio, [c.1970], two punch-holes held together with split-pins, occasional staining, nicks to title page, child's doodles in pencil

[with:] a single leaf torn from a magazine including a photograph of Robinson, MacKerrell, and housemates, outside their Camden Town house, late 1960s

Here's the photo mentioned (Robinson's on the far left, Vivian MacKerrell is, I think, back row centre):

... and here's that typescript page again, big enough to read it. As you'll see, it's mostly familiar from the script, with some extra detail... It's very much a working draft, with (presumably) Robinson's handwritten amendments and ideas for revisions. Obviously the person who ends up with this typescript will not also be buying the copyright (which will remain with Robinson), so I expect it's going to remain unpublished. Enjoy this little bit of it then...

UPDATE: Turns out I was right: the typescript sold for just over £8,000! Details here.
Posted by Withnail Books at 12:56