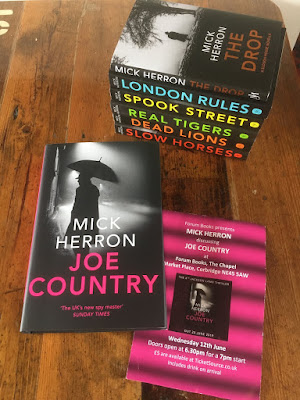 UPDATE: AND THE ANSWER IS... GARY OLDMAN!


One of the more popular posts on this blog in recent times is this one, which asks 'Who Should Play Jackson Lamb?' in the inevitable TV version of Mick Herron's sublime spy thriller series. To celebrate the release of the sixth instalment of the Jackson Lamb/Slough house saga, Mr Herron is doing a few signings, so Sam the Black Hand Wine Man and I motored over to Forum Books in Corbridge — which, by the way, is an object lesson in how to run an independent bookshop* — to meet the man himself.

If you're not familiar with Jackson Lamb and his crew of Slow Horses, the previous blog entry will bring you up to speed. Mr Herron in conversation was fascinating: he talked at length about his writing process ("anyone watching would just think I was a professional-level solitaire player"), his relationship with his characters ("I could never write a female character I didn't like, though that doesn't go for my male characters"), and the yes-it-is-going-to-happen-probably TV series. While conceding that he's been saying for many years that the TV series is looking "probable" it apparently is looking a lot more probable of late. Indeed, he spent several days in the 'Writer's Room' breaking down the story with the guys tasked with bringing the first book to the screen. "We had a different thing for lunch every day! It was fantastic!" he marvelled.

While he understands the interest in the TV series, and welcomes the attention and sales it could bring, Herron does find it slightly exasperating that a book's success is often gauged by whether it is turned into something else: "You wouldn't say to a painter, 'Oooh, I love that painting. Is it going to be turned into a sculpture?'"

A fair point, but it doesn't mean I'm not looking forward to Jackson Lamb onscreen! Mick remained tight-lipped about other details, including casting, though it sounds as if they have simply not reached that stage yet.

One other thing: Herron was hilariously keen to insist, for legal reasons, that the character of Peter Judd was *not* based on any particular politician, when it is very, very clear that he's actually... well, read the books for yourself, and if you have read them, you'll know! (Hint: I'm currently hoping against hope that he's not going be our next Prime Minister...)

Anyway, we have a new Jackson Lamb novel, which is the main thing! I've not read my copy yet, but I do have a complete set of all the Slough House books to date, all signed by the author, for sale if anyone wants to dive right in!


*Another reason to visit the excellent Forum Books in Corbridge is that right opposite it is The Oldest Pub In The World: a tiny hostelry built into a Pele tower/fortified vicarage built in 1300. Here's Sam sitting on a throne having a pint. Chin chin! 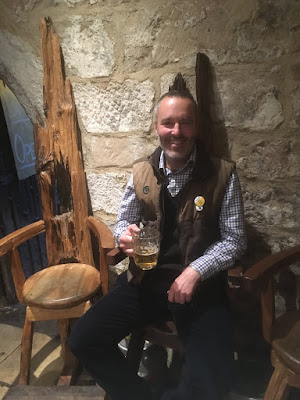