War, Wine and Women: The Most Famous World War One Memoir You've Never Heard Of

With World War One centenaries now set to come thick and fast over the next few years, now is as good a time as any to have a look at a long-out-of-print book which few have heard of, even though in its day it was a widely read bestseller, right up there with Memoirs of an Infantry Officer and All Quiet on the Western Front.

War, Wine and Women, a war memoir by Wilfred Saint-Mandé, was published in June 1931. The example Withnail Books has in stock is very much a reading copy... 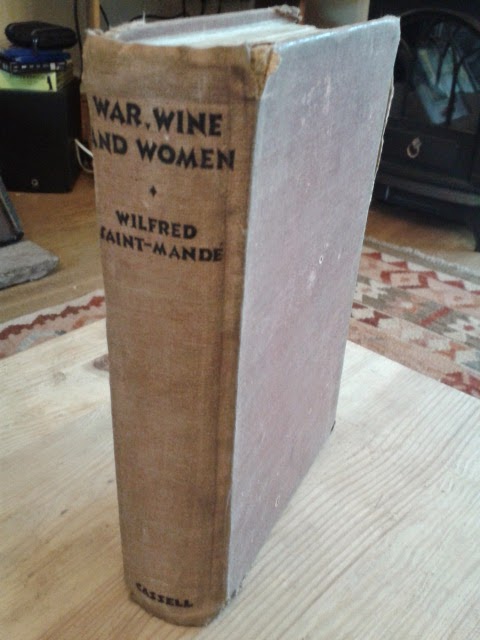 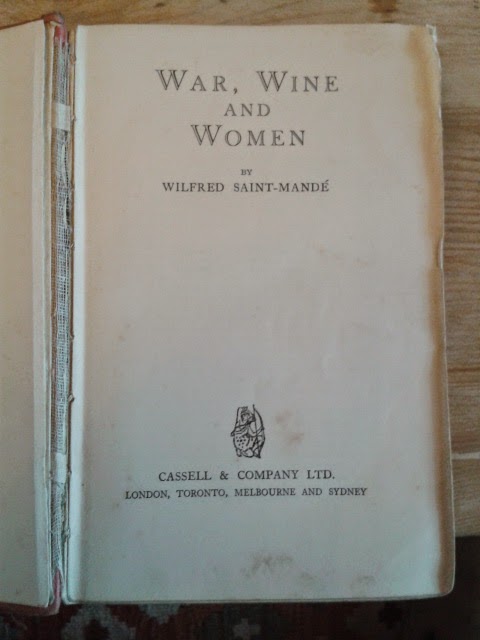 ... and is a third impression, from the the same month as the first: 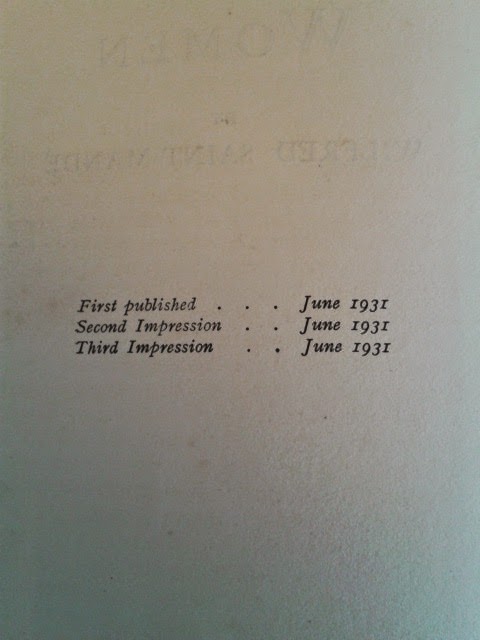 Sales of the book were evidently brisk. Much of its popularity can probably be put down to the 'wine' and 'women' parts. Wilfred is very much a man about town, and his adventures before being sent to the Front (and indeed after) involve many and varied encounters with many and varied women, recounted in a way that was extremely racy for 1931. The young widow Daphne, for example, in addition to "slender ankles and shapely calves", had "firm little breasts which stood out challengingly". Steady on! She later gives him a pair of her silk knickers for luck.

Once in the trenches, Daphne's delights are a distant memory. Here's an excerpt, which even in 2014 can't help but impress with its blunt, unflinching detail:

With startling suddenness the guns started firing, and from the German lines coloured S.O.S lights soared skyward. His artillery was at that time far superior to ours, and in less time than it takes to tell, hell broke loose in all its fury. Our front line, communications, and supports, were literally plastered with shells of all calibres. The Véry lights and bursting shells were like a Crystal Palace firework display, only a thousand times more impressive, awful and terrifying. The big shells sounded like express trains roaring overhead, and the deafening nerve-shattering crash, as they exploded deep in the ground, sending up showers of earth and stones and often mangled men, is beyond my powers to describe. I do not believe the horror of it can ever be communicated to those who have never experienced it. The earth shook and heaved, acrid fumes filled the air, and massive jagged splinters of steel came hurtling down, dealing out death and mutilation. It was as if on some overhead platform ten thousand carters were tipping loads of pointed steel bricks that burst in the air or on the ground, all with a fiendish ear-splitting devastating roar that shook the nerves of the stoutest.


Part of our parapet was blown in, and a dug-out demolished by a direct hit, which destroyed the occupants and buried them at the same time. I was covered with earth and flying debris, but clambered clear. As I got up again a sod as big as a pillow struck me in the chest and sent me sprawling in the mud, where I lay dazed and cowed. Before I could get up a shrapnel shell burst about ten yards above my head and a man at my side crumpled up and lay in a pool of blood. I tried to help him but quickly saw that he was beyond help, with a gaping wound in the head and a score in the body. I wondered how much longer my reason could stand it, and had a mad desire to run until I got out of the shambles. I felt that my face was wet, and, drawing my hand across it, discovered it was bloody. Then I saw I was sprinkled with the blood of the corpse near my feet.

Another burst in the air sent pieces of casing and shrapnel bullets whizzing down, and I felt a sudden hot stinging pain at the side of my head. Blood flowed freely but it was superficial and nothing but a fairly deep cut. For an instant I was tempted to jab it with my bayonet and go down the line. Then I realized that more shells were falling behind our trench than in it, so decided to stay where I was. A high-velocity shell shrieked and burst in the next bay. Crawling round the traverse I saw Corporal Stamford lying broken up and yet still moaning. He had a terrible wound in the belly and the genital organs were reduced to a pulp. The left side of his face had been severed as if by a gigantic razor. His hands were bloody stumps.  I then observed that there had been another man in the bay with Stamford, but his remains could have been gathered up with a trowel. Parts of him were sticking in the sides of the trench, a leg lay in one corner, part of a mutilated trunk in another, while the head was embedded in the parados. With a shock that almost made me faint I realized the remains were those of Greenling, who had been the sentry in that bay. An artillery officer, who had been directing the fire of his battery, was lying on his face with a piece of shell a foot long and as thick as a cricket stump sticking out of the middle of his back. He was dead, so I did not bother to pull it out.

Strong stuff. Back in 1931, the reviewer for The Spectator noted that the book:

"puts on record how another individual endured the War, and with more candour than most, the joy he had in it. The charnel house is no longer part of our lives, the skeleton does not face us at every turn, but for a while, here and in this book, it is brought very close."

Being sure to mention the "photographic realism of the love episodes", the Spectator also opines:

"If you want the picture of a hero, Mr. Saint Mande's book will give it you, twopence coloured. War, Wine and Women is a very long book, and much of its length is irrelevant detail such as no practised writer would have permitted himself. But many passages are written with a verve that few practised writers could imitate. As a record of personal experience, the book's authenticity is open to doubt."

The reviewer was wise to cover his arse. For now we come to the reason why War, Wine and Women is all but forgotten today. It is, in the word(s) of Arnold D. Harvey in Muse of Fire, his overview of literature, art and war: "tosh".

Wilfred Saint-Mandé never existed. The author was in fact one John Henry Parkyn Lamont, an Englishman who when he wrote the book was a lecturer in French at the University of Pretoria. Lamont had served in the war, but later admitted that the book was little more than a novel with the war as its background.

If the book is remembered at all these days, it's for the large kerfuffle it caused when it originally appeared in South Africa. In one brief episode, Lamont has one of his characters, a cad named Danesford, drunkenly describe his experiences in the country. He's not very complimentary: "the back-veld Boer bathes only for baptism, marriage and burial. He has no notions about sanitation and often uses his bedroom as a latrine."

This did not go down at all well, especially when it got out that 'Wilfred' was in fact living in South Africa. Once his identity was uncovered, Lamont was kidnapped by some furious students. As Frederick Hale's fascinating paper on the case details:

"Near the edge of the veld, the four young men ordered him to walk into an open garage, where they removed his clothing and placed a bathing costume on his otherwise almost naked body. They then coated much of his skin with grease, ripped open a pillow, and spread on him the feathers which it had contained. The muggers completed their attack by placing around Lamont's neck a placard identifying him in both Afrikaans and English as the author of War, Wine and Women, depositing him on Church Square in central Pretoria, and informing him that he could retrieve his clothing at Turkstra's Tea Room."

Lamont was ultimately hounded out of the country, much to the approval of the local press, as this contemporary cartoon from Die Burger shows: 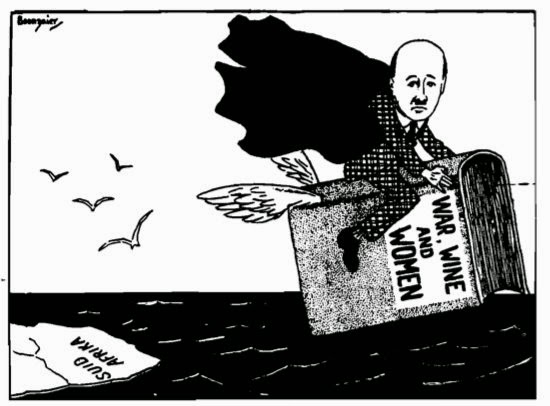 Not the background I was expecting to find (after some pretty deep googling) when I thought I'd leaf through a book on the Great War.

Still, the book certainly has its merits, and doesn't deserve to completely fall between the cracks of history. I'll leave the last word to Arnold D. Harvey, as I think he hits the nail on the head:

"War, Wine and Women must be regarded as a successfully calculated piece of book-making — one that brought its own poetic retribution in the failure of Lamont's later books to meet his expectations — and as such presumably related more to the author's assessment of what readers expected than to personal agonies that needed to be exorcized. And yet the author was in the war, and though not killed, or like his protagonist, mutilated, the war presumably made as a big a hole in his life as it did in the lives of other participants. War, Wine and Women may be tosh, but it is still an ex-soldier's attempt to salvage some sort of literary statement from what he had lived through."