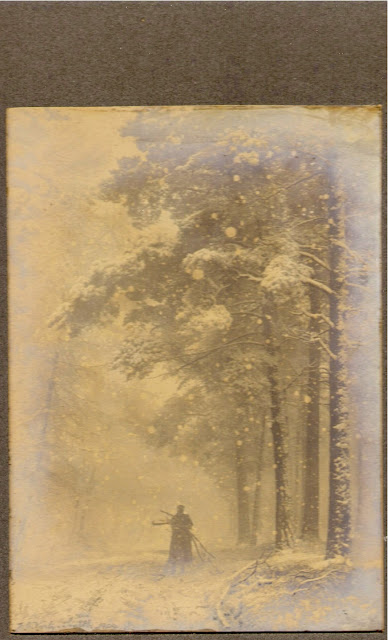 This photograph arrived as part of a batch of old prints from various photographers which included one I've already mentioned, but it stood apart from the others, which were all posed portrait shots.

The scan above doesn't really do it justice. It's not large, about 8in x 5 1/2in, and has a sheen of what I assume might be silver nitrate around the edges, which gives it a kind of halo effect. While it's obviously a snow scene, there were additional white dots/blotches added to the image at the printing stage to heighten the 'snow' — at least I think they were; they don't appear to be signs of ageing (they are part of the printed image), though I admit I'm no expert in these things.

So, perhaps the photographer was experimenting a bit at the developing stage, aiming for an 'artistic' effect to heighten what is already a nicely composed, rather atmospheric picture.

The print is signed in pencil, bottom left, 'J. C. Varty-Smith 1904'. It turns out Mr Varty-Smith was a Penrithian of some note, and evidently a gifted photographer: this page, detailing an exhibition of recently acquired items at the Penrith and Eden museum (which is just down the road from Withnail Books) includes a mention of 'medals awarded for photography to a Penrithian J C Varty-Smith (d.1924) an early patron of the Museum.'

J. C.'s google-friendly name (how many other J. C. Varty-Smiths do you know?) crops up in various other places too. He wasn't just a patron of Penrith and Eden museum: a sample of Spring Sandwort he collected is in Manchester Museum, and the Fitzwilliam in Cambridge has a whole collection of glassware collected by J. C. and donated by his sisters, 'The Misses Varty-Smith', including a Rum Decanter made by the Bristol glassmaker Lazarus Jacobs. The Fitzwilliam doesn't have an image online, but it sounds similar to this one at the V&A: 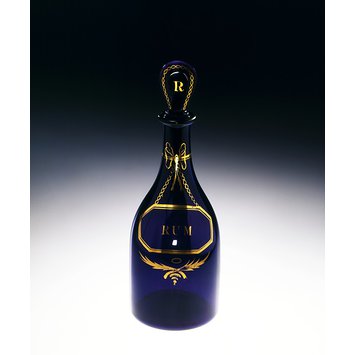 J. C. didn't just collect things, he wrote about them too, including a paper on creepy-crawlies:

He also turns up, brilliantly, on the Victoria and Albert Museum's 'Knitting Reading List' for his no doubt definitive:

'Some Knitting Implements of Cumberland and Westmorland', in Connoisseur, Vol. XXV, 1909

There is a very badly OCR'd archive of the text of Connoisseur magazine online here, alas it's too garbled to read much, though the tantalising opening paragraph of the article is clear:

J. C. Varty-Smith sounds like a very cool Penrithian. I'd love to know more about him, and indeed shed more light on his photography, and specifically the background to the image above. I think a visit to the Penrith and Eden Museum is in order...
Posted by Withnail Books at 13:43